For almost as long as we’ve been in business there has been a lonely mansion in Burr Ridge at 6501 S County Line Rd that has been looking for someone to love it. Once known as Villa Taj and later as Palace Royale, it has been on and off the market through the years, starting out with an initial list price of $25 MM in May 2009.  In all that time it has only been occupied for about a year by one investor and has suffered a really strange fate. It is now listed for only $7 MM.
This home was originally built sometime prior to 2009 by a rich dentist, Husam Aldairi, who owned 8 dentist offices in the Chicago area, 13 upscale residential buildings, and a condo in Miami. The neighbors apparently complained to the city that it looked like a Mosque and Aldairi claims there were lots of building inspector delays. His wife never liked the place so they never moved in.
Despite being filthy rich (at least at one time) this guy’s life is a train wreck. He filed for bankruptcy back in 2008, there are foreclosure filings on the property back in 2009, there have been sexual harassment lawsuits against his employees, and some guy tried to convince him to engage in an illegal Chicago real estate transaction and when Aldairi refused this guy told Aldairi’s wife that he was having affairs with other women. Aldairi sued him.
The property has had it’s own incredibly sordid story over the years. We first wrote about Villa Taj when it was listed for $25 MM. It was a pretty pathetic listing. In late 2010 they cut the price to $13 MM but still had no takers. They even tried auctioning it off without success. Then in 2011 it flooded with 6 million gallons of water. Supposedly a Rosemont based development company purchased the property for an undisclosed amount in June 2012. And eventually it was reportedly bought by a group of investors later that year for $3.1 MM. Then in June 2015 – and you cannot make this stuff up – some guy from Lombard tries to seduce a woman by claiming to own Villa Taj. He basically moves in and brings her there. They were caught in the hot tub. I don’t know if they were wearing bathing suits or not but it’s fun to speculate.
So the investors fixed the place up and tried to sell it on the MLS’ private market in June 2016 but that didn’t work. Were they surprised? Like…”private” means hardly anyone knows about it. But it sounds cool. Finally they listed it a month later for $10.95 MM. The photos from that listing showed the property surrounded by a bunch of fancy cars to reinforce the notion that this home is for the rich and famous. They let that listing run until August of this year, at which point they blamed the realtor for the fact that it hadn’t sold and took it off the market. On November 2 they relisted it with a new realtor, which is how I know they blamed the previous realtor for it not selling.  However, even though it was the old realtor’s fault that it hadn’t sold they cut the price to $7 MM, which is supposedly breakeven for them. Yeah, home sellers do stuff like this all the time.
Here is the description from the MLS:

I’ve got some of the photos in the slideshow at the bottom (You need to make sure you’ve given the page plenty of time to load – until you see the side arrows). Oddly enough there are very few captions on the photos and some of the captions are just plain wrong. And this is a $7 MM listing? So you can’t tell what rooms you are looking at.
Just to review, the home is over 30,000 sq ft on more than 2.5 acres with 8 bedrooms, 8 full baths, 3 half baths, 9 fireplaces and a 22 car garage. Property taxes are over $64,000/ year but I think that’s based on a $3 MM valuation so if you actually pay $7 MM for this home your taxes are going to more than double. 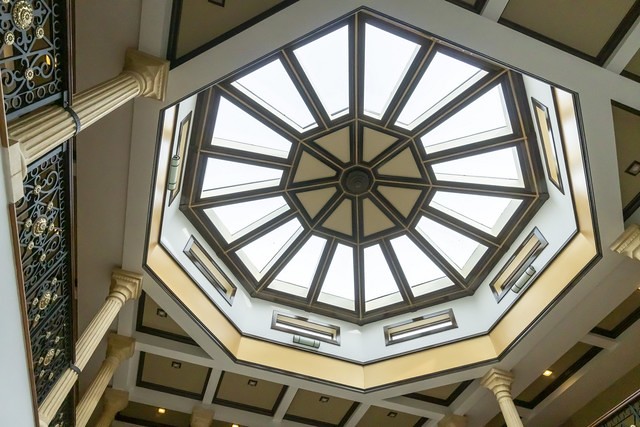 #RealEstate #ExpensiveHomes #BurrRidge #BurrRidgeRealEstate
Gary Lucido is the President of Lucid Realty, the Chicago area’s full service real estate brokerage that offers home buyer rebates and discount commissions. If you want to keep up to date on the Chicago real estate market, get an insider’s view of the seamy underbelly of the real estate industry, or you just think he’s the next Kurt Vonnegut you can Subscribe to Getting Real by Email using the form below. Please be sure to verify your email address when you receive the verification notice.