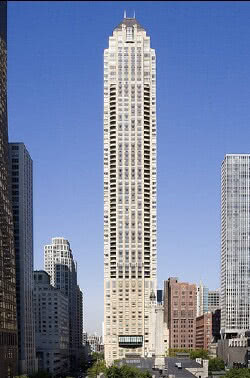 The Park Tower is a 70-story building that shares space with the Park Hyatt Hotel on Michigan Avenue. The building was designed by Lucien Lagrange Architects, and built in 2000 over the former Park Hyatt hotel, built in 1960. Because of the wind-buffeting from its neighbor, the John Hancock Center, the north and south walls have extra reinforcement, and a 400 ton steel pendulum is located in the top of the building to provide inertia against swaying. The facade of the 1907 Perks, Fellows, and Hamilton Office and Studio was retained when the building was redesigned, and the Park Tower is 40 feet behind the facade, giving the impression that the old facade still stands. The tower is one of the tallest non-steel-framed structures in the world, being instead cast-in-place concrete framed.

The Park Tower is located right on the Magnificent Mile, three blocks from a Red Line stop. The building does welcome pets. There are only 117 residences in the condo floors, which range from the 20th to the 67th. The top 6 floors each have a single penthouse unit that is 8400 square feet.