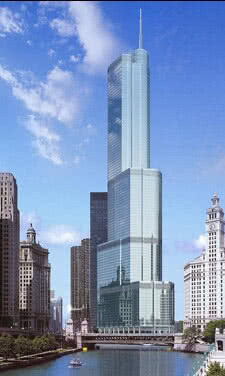 Billed as Chicago's newest Landmark, The Trump Tower Condo and Hotel is located at 401 North Wabash in the River North neighborhood and is overlooking Chicago and the Magnificent Mile.  At 92 Stories, the Trump International Hotel & Tower is one of the tallest buildings in Chicago. As an interesting side note the scene towards the end of the Dark Knight movie where Batman and The Joker are fighting on the edge of a building was shot from one of the floors of the Trump Tower while it was under construction.

Designed by Skidmore, Owings & Merril, the Trump Tower resides in the space formerly occupied by the Chicago Sun-Times and sits on the North side of the Chicago River just west of the Wrigley Building.  In October 2004, the demolition of the former Chicago Sun-Times Building began and in March 2005 construction began. The demolition and construction were financed by a $650 million dollar loan from Deutsche Bank and a trio of hedge fund investors.

The design of the building incorporates three setbacks to help lend an aesthetically pleasing continuity to the Chicago skyline. Each of the setbacks is designed to reflect the nearby buildings: the first was designed to align with the Wrigley Building, the second with the Marina City Towers, and the third with the 330 North Wabash building.

Each floor is separated by a concrete slab, and stainless steel, glass,and aluminum panels are attached to each floor. 50,000 short tons of reinforcing steel bars, called rebar, support the hotel.

In October 2006, controversy erupted over a 10 feet by 4.5 feet street kiosk in front of the Wrigley Building at 410 North Michigan Avenue that advertised Trump Tower. There was extensive debate and publicity regarding the issue of whether advertising of this type should have been allowed. After a request to remove all advertising, Trump only agreed to remove pricing information from the signage.

Donald Trump has been sued by former Chicago Sun-Times publisher F. David Radler for rescinding all "friends and family" condominium purchases.. Radler had negotiated the joint venture purchase of the property for the purpose of building the skyscraper. The purchase price had been at a 10% discount and required only a 5% deposit instead of the standard 15%. Radler and family were part of a group of 40 insiders involved in the planning and designing of the building who were able to purchase property at about $500 per square foot.  When the market value of the property eventually rose to over $1300 per square foot, Trump nullified the"friends and family" sales.  In January 2007, Trump cited both a clause about "matters beyond [the] seller's reasonable control" and the desire to "have more income to handle potentially higher construction costs".

In early November, 2008 Donald Trump filed a $3 B lawsuit against his lenders in order to avoid paying $40 MM that was due under his personal guarantee. His claim was that he was not obligated to pay the loan amount because he was exempt under the force majeure (acts of God) clause - i.e. the country's "depression" was beyond his control. He also complained about the lenders not permitting him to lower the prices of his units in light of declining real estate values.

With the deterioration of the economy, buyers have been having difficulty closing because of job losses and lenders cutting back their real estate lending. In addition, most lenders will no longer lend money for purchases in hotel condo buildings. Since the purchase contracts did not provide for mortgage contingencies, many buyers are stuck and at risk to losing their deposits. Consequently, a number of buyers attempted to reassign their units to other buyers at prices 30% below what Trump was charging and they listed these units for sale with real estate agents on the MLS. Apparently, Trump was allowing reassignments for a period of time but then their lenders put the kibosh on this practice. Supposedly their lenders would also not allow them to cut the prices on their developer units, so the existence of these reassignments was creating the two tier pricing system. Subsequently, the Trump organization  forced  agents to take the listings down, claiming that since the sellers didn't own the units yet they couldn't list them for sale and they also informed the buyers that they could not reassign their contracts. However, Trump made an exception for friends and family (like...the bank was OK with this?). Officially, Trump says they are working with these buyers to help them get financing and to grant them more time to close. Of course, if these buyers fail to close, Trump will be reselling these boomerang units. There is a good chance that Trump does not want these buyers undercutting the prices they are charging on the remaining developer units.

Behind schedule, the hotel opened four floors of guest rooms on January 30, 2008, which contained about 1/3 of the hotels 300 plus rooms.  The grand opening of the entire hotel, including amenities, took place on April 28, 2008.

In early February 2008, a restaurant named Sixteen opened on the 16th floor.  Designed by Joe Valerio, it is described architecturally as a sequence of spaces that do not reveal themselves at once, but rather in "procession". The foyer is T-shaped, and the passageway to the hotel is lined with floor-to-ceiling architectural bronze wine racks in opposing red and white wine rooms.

The restaurant has been described as pricey. However, others feel the prices are appropriate for the ambiance created by the interior design, architecture, views, and association with Trump.

Located on the mezzanine level, the sleek Rebar (named after the steel material) bar opened in April 2008 and it touts itself as a "Liquid Kitchen" due to its use of fresh fruits, vegetables and herbs.

Residents of the Trump Tower are just minutes from the famed retailers along Michigan Avenue, designer boutiques along Oak Street, and the nearby theater district in the Loop. Forget about all the great restaurants.

Because the structure of the building changes as you move between floors, the floor plates and associated floor plans change every few floors. Therefore, unit A (just as an example) is not the same between all floors - only within a group of floors.