The Chicago Pedway is a series of tunnels, concourses, and overhead bridges that makes a network of pathways through the Loop, enabling the adventurous traveler to get from place to place without having to expose oneself to the elements. While it does provide a valuable service to Chicago residents, it is not well-documented nor well-labeled, and can be tricky to navigate.

Construction on the Pedway began in 1951, when the city of Chicago built two tunnels between State and Dearborn, connecting the Red and Blue Line stations at the Jackson and Washington stops. Although the Pedway would stretch 40 blocks if all its sections were laid end-to-end, it is not a fully-connected web as one might expect. Rather, it is divided into two major sections: one that connects much of the Loop with CTA and Metra stations, and then another section that links a number of buildings east of Michigan Avenue and south of the Chicago River. It is possible to make a trip from the Prudential Plaza to the Cultural Center to the former Marshall Field's and then over to the the James R. Thompson Center without ever having to expose yourself to the elements.

The Pedway has been constructed by various interests, including both government and private developers. Because these efforts have not been coordinated, the Pedway can often be very confusing. The signage is rare and not particularly clear (one of the few existing maps can be found near the Daley Center), and to make matters more complicated, there are currently no print maps of the Pedway available to consumers. In theory, new maps are forthcoming, but they will not be provided until after the reconstruction of the tunnel connecting the Cultural Center with the former Marshall Field's. Although the portions connecting the Red and Blue Line CTA stations are open 24 hours, the Pedway is generally only available in its entirety from 6 am to 6 pm. (The Chicago Department of Transportation estimated in 1995 that 20,000 people a day made use of the Pedway tunnels connecting the L stops; this number can double during the winter.)

For the most part, the buildings connected by the Pedway are governmental or commercial buildings, including a large number of office buildings. However, two residential buildings do boast connections to the Pedway: The Heritage at Millennium Park, and the Park Millennium. A handful of hotels also connect to the Pedway, including the Swissotel Chicago, the Hyatt Regency Hotel, and the Stouffer Riviere Hotel. Other notable buildings include City Hall, the Aon Center, the Prudential Center, 203 N. LaSalle Street, the Chase Tower, the Daley Bicentennial Plaza, and the Blue Cross Blue Shield Tower. A full list of connected buildings can be found on Wikipedia.

Scroll down for a map of the Pedway, provided by Happy Mazza Media LLC. You can click on the image for a larger version of the map. 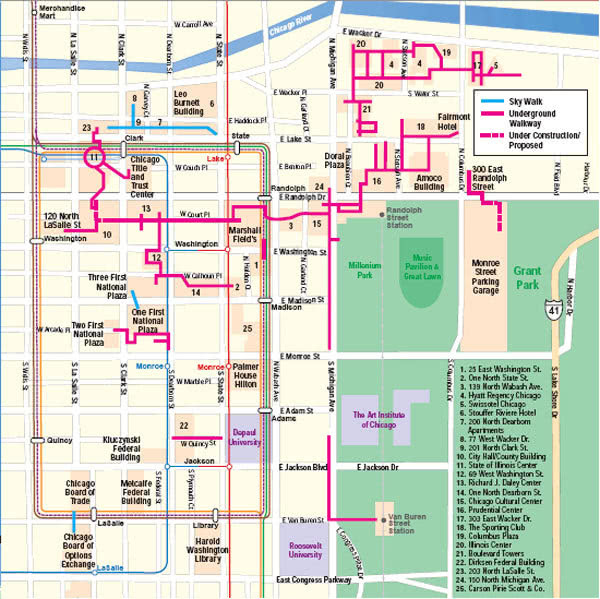